Update 2018-04-20: I’ve rolled the information in this post, and updated it, into a new post about setting up a WSUS server from scratch on Windows Server 2016 Core. The post is also suitable for a regular Windows Server 2016 server with a GUI. You can read it here.

If you’ve been managing a WSUS server, you may have run into the well known MMC connection error above (appears as Event ID 7053 in the Event Viewer) by now. I started experiencing it more often after installing Windows Server 2012 R2’s WSUS but was able to quickly solve my issue. Later when setting up another 2012 R2 WSUS server I had the same issue but the same fix didn’t work. I eventually solved the problem with that server though.

Here’s a small collection of resolutions and notes on this problem. On one of my WSUS servers, increasing the memory allocated to the WSUS application pool in IIS solved the problem. The server in question was a Hyper-V VM with 8GB of RAM (non dynamic) allocated. I increased the pool to 6000000 KB (6 GB) and thus far it’s solved the issue on this server. 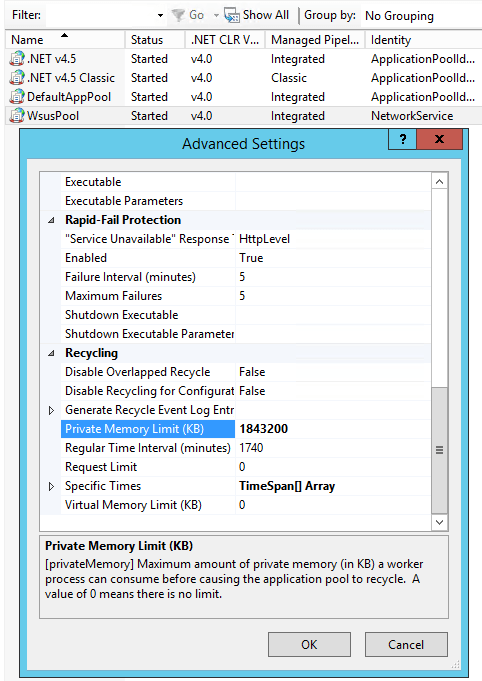 On another WSUS server I setup recently, (which had less RAM) the issue was solved by running the WSUSUtil command line utility. WSUSUtil is located in %systemdrive%\Program Files\Update Services\Tools folder.

From what I’ve read online a common cause of the problem seems to be the installation of certain updates and the reported solution is to uninstall these updates - I’ve never had to uninstall any updates to solve this issue, at the time of writing. To give you an idea of how strange this issue seems to be, I’ve had this exact problem when I’ve installed WSUS:

Hopefully this helps you in someway. I’ll make a post in future on how I install WSUS servers currently and some things that I’ve learned to look out for, but until then happy WSUS’ing! I think this is the worst way I’ve ever ended a blog post ever.